My sweet little boy has a problem.
He has discovered cat nip and he loves it!
For Christmas, Riley got some toys that contained catnip. He is crazy for the stuff.
Here he is with a new scratching post that is infused with catnip.

Wishing all critters great and small the merriest of Christmases.
Peace and love to all! 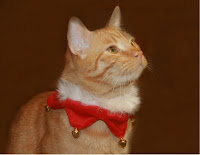 It was one year ago today that our sweet Buster was diagnosed with VAS - vaccine associated sarcoma http://www.vas-awareness.org/. It eventually took his life in March of this year.
We were devastated when we found out. We had never heard of this disease. We kept hoping against hope that the lump on his back was something that could be cured or fixed - a fatty tumor, an infection, a dislocation - anything but what it was - an aggressive cancer caused by the vaccines that were supposed to keep him healthy and safe. I can't tell you the guilt I felt thinking I had caused this in him. I urge all cat owners to be aware of this and to discuss this possibility with your vet before deciding about vaccinations.

It's only been nine months since Buster passed away and we miss him so much.
I hope to share some stories about him with you but today I'm just missing him.
Rest in peace, my baby.
Posted by Joy Collins at 7:35 PM 1 comment:

I had to redecorate the tree this morning. I found Riley chewing on the doo-hickey that the ornament hangers hook into. One of them had come loose from one of the Christmas balls he was batting around and he had it in his mouth. He knew he wasn't supposed to, either. As soon as I saw what he was doing I grabbed for it and he tried to dash away with it.
So, since that's a potential choking hazard, I took all the balls down and packed them away. The tree looked awful. So, I dug out some other decorations I had used in years past when the other cats were younger. I saw a tree in a magazine that year that had pointsettias used as decorations. I had gotten a bunch of silk ones from the local craft shop and they didn't look too bad - that year. Now, they are kind of flattened from being packed away and I still can't have anything on the two lower branches because Riley grabs everything that's within his reach.
The tree looks kind of sad complete with lop-sided angel. But it IS Riley's First Christmas. He'll only be a kitten once.
And that's my story and I'm sticking to it.
Posted by Joy Collins at 11:01 AM No comments:

Riley saw his first javelinas this morning and boy, was he interested. He's actually the one who alerted me that they were outside my office window. For those of you who don't live in Arizona, javelinas are the weirdest creatures. http://www.desertusa.com/magnov97/nov_pap/du_collpecc.html
I shot some pictures through the window and since javelinas are nocturnal, the lighting wasn't the best but you can still see them pretty well. They were after the bird seed from the feeder outside my window.
There was even a tiny baby in the group. He's at the end of the arrow [click pictures for a larger view - hit "back" button to return to this page].

Posted by Joy Collins at 7:27 AM No comments:

Kitty up a tree

Frankly, I wonder what took him so long.
I took all the garland off this morning. Half of it was off anyway and I read that it's not good for cats to eat it. Good thing I bought all those unbreakable ornaments because Riley likes them. They roll so well. Oh, well, we expected this. He's only a kitten once.
Posted by Joy Collins at 7:21 AM No comments:

I expected Riley to climb the tree but so far he hasn't tried that. He is fascinated with the balls and garland, though. Luckily, I thought ahead and bought a bunch of unbreakables. So far, I've had to redecorate the bottom row of branches three times.

John was just in the dining room and heard a thump. He looked at the pantry door which was where it sounded like the noise had come from. Just then, he saw dry stuffing mix spill out from under the door from the pantry side! Never a good sign.
Seems Riley had scooted in there when I was putting the canned cat food away. I didn't notice him and closed the door, with him on the inside. He was trying to find his way out and started climbing on the shelves knocking boxes over. The Stove-Top Stuffing box had been opened previously and just had the plastic lid on it which popped off when he knocked it off the shelf, spilling stuffing mix all over the floor.
Oh, well, the pantry needed to be vacuumed anyway.....
Posted by Joy Collins at 2:40 PM 1 comment:

Well, of course you knew it was coming.
What better way to aggravate the new kitten than to dress him up as Santa for his first ever Christmas photos?
Riley was not nearly as excited about this as I was. Thank goodness for velcro. The hat and beard lasted longer than I thought they would.
These are some of the out-takes. I'm still aiming for the one that I can officially use for projects, cards ,etc.
Posted by Joy Collins at 5:51 PM 1 comment:

Just when I thought this little guy held no more surprises for us, he proves me wrong.
I should have known.
John and I went out to brunch this morning. We weren't gone but an hour and came home to this.

[Click on photos for a better view - the second one is a doozy. Hit "back" to return here.]
Riley had somehow crawled behind the fireplace screen in the living room and got soot all over himself. John had vacuumed the log area out and it was clean. No ashes anywhere. But it looks like Riley decided to try and see what was up the flue and rubbed himself against the walls of the firebox. I tried washing it off with some kitty wipes I had but he's going to be dingy for a while until he gets himself clean again.
Good thing he's cute.............
Posted by Joy Collins at 1:17 PM 4 comments:

Why I get nothing done

We had Riley neutered recently for all the usual reasons. But I was secretly hoping it would slow him down a little, too. I can't ever remember having a kitten with this much energy. Sadly, the surgery honeymoon only lasted 24 hours.
By the morning after, he was at it again.
John had brought me some flowers that morning that I placed in a vase and had sitting on the kitchen counter before I put them someplace safe. Ha!
While I was talking to John about something else, within mere seconds, Riley had jumped up onto the countertop and right in front of us, knocked over the vase of flowers, spilling water all over the counter top.
So I had to put them in the guest bathroom so that I could close the door where they would be safe.
But I couldn't see them in there.
So I took a picture of them and made it my desktop wallpaper on my computer so I that I could still "look" at them.
John said if he had known that he would have taken a picture of a really expensive bouquet and just brought that to me. It would have been cheaper!
Posted by Joy Collins at 1:29 PM No comments:

This happened when Riley was 6 months old. Some days I wonder if he's going to see his first birthday...
It was a little after 3 AM one morning. John and I were sound asleep.
All of a sudden, I heard a hollow thud and my subconscious knew immediately what that noise was. I sat bolt upright in bed and looked to my left to the hearth [we have a fireplace in our bedroom].
Riley had overturned the 5 gallon pet water dispenser and water was happily gurgling all over the floor.
I yelled "Water!" and my husband sat up.
"What? What?" He doesn't wake up very fast.
"Riley overturned the water." By this time, the water was three feet wide and still coming.
We both jumped up.
I righted the fountain. John ran for towels. Riley ran for cover - he knew he was in trouble.
I won't repeat what John said - you can imagine.
After we cleaned that up, we tried to go back to bed but John kept tossing.
"I think I have a cluster headache," he said. He gets those occasionally.
So we got up so I could get him one of the Imitrex pills that I keep in the kitchen.
Not good for Riley...
As we rounded the dinette, what did we see?
The OTHER water dispenser [a 3 gallon one] overturned in there.
More towels. More unmentionable words. This time, Riley got a swat on the behind.
So, after that was cleaned up, we walked back to bed.
As we passed through the living room, I looked over at the fireplace in that room and saw that the fireplace screen had been knocked over and was flat on the floor.
Two of Riley's toys were lying next to it, a sure giveaway.
I looked at John and just pointed.
He waved his hand and didn't say a word and just continued walking to bed, muttering.

Riley is the newest addition to the Collins household. Born in March 2008, he came to us this past May as we searched for a new orange kitten after our beloved Buster passed away, a victim of VAS - Vaccine Associated Sarcoma [more on that at another date]. This picture was taken within hours of his arrival.
My husband found Riley for sale on Craigslist - Riley's full name is Riley Craig Collins, in honor of that fateful encounter. He was just a baby, weeks old, and orphaned. He had been bottle-fed and needed a forever home. He weighed just a pound and a few ounces but he turned our quiet home upside down and healed our hearts.
And he continues to do so every day.
This blog will be dedicated to Riley's adventures and all the tails in our home!
Posted by Joy Collins at 12:55 PM 1 comment: