Chaz is one year old today 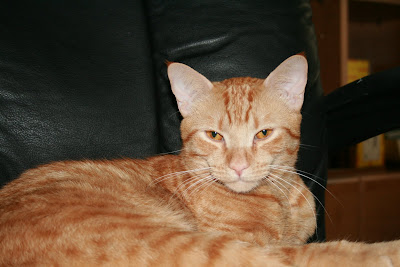 Chaz was in a silly mood last night 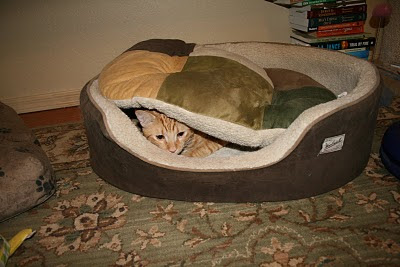 "Mom, have you seen the instructions for my bed? This doesn't seem right."
Posted by Joy Collins at 6:11 AM No comments:

If you are serious about using natural and homeopathic treatments for your pet [as well as conventional methods] check out this site: Only Natural Pet Store.
I just ordered Toby's pheromone collar there and even with shipping costs, their prices were the best. I have ordered other items from them before and recommend their service.
Posted by Joy Collins at 10:23 AM 2 comments:

Toby is having such a good reaction to her pheromone collar that I thought I would write about it a little more. While I had heard about pheromones a while back it was in the context of sexual attraction and something I really thought was nothing more than a gimmick to sell perfume. I also knew some animals [like bees] used pheromones to communicate with each other but that was pretty much my sum total of knowledge.
Then, a couple of weeks ago, I saw a display for pheromone collars for dogs at a pet resort here in town. The packaging said it was useful for fearful behaviors in dogs - separation anxiety, etc. Apparently, it emits a scent that reminds them of the time they were with their mother and is comforting. It seemed tailor made for Toby. We were forced to place her on Prozac about a year ago because of her high anxiety levels. It wasn't something I wanted to do but nothing else [herbs, homeopathic remedies, etc] seemed to help her. And after she injured herself going through the kitty door a couple of years ago while we were away, I wanted to make sure she didn't feel that upset ever again.
So, I tapered her of the Prozac and placed the collar on her. The transformation was almost immediate. She seemed like her old self, when she was a much younger dog and enjoying life. The irritability that I had noticed creeping up in her while on the Prozac subsided and in its place was a carefree happy dog. She has been playing more with Jessie. She also doesn't seem to mind the triggers that before would send her retreating under my desk. Before, even a raised voice [even if it was raised in exhilaration] would make her nervous and she would look to us for reassurance and show anxiety behaviors. Now, she looks up when she hears a trigger and then just goes back to whatever she was doing. She's eating better and the irritability is gone.
We couldn't be happier with her response.
I wonder if they make these for humans? :>)
Posted by Joy Collins at 7:17 AM No comments:

Toby's leg appears to be all healed 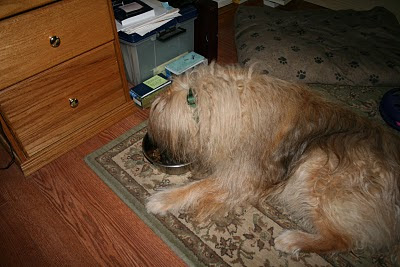 We have graduated her off the leg brace and there is no sign of limping. We still give her the occasional Petaprin when she overdoes it but overall she is doing very well. We have even gotten her off her Prozac. She is now wearing a pheromone collar and it seems to be working for her. Her anxiety level is way down.
Posted by Joy Collins at 12:10 PM No comments: 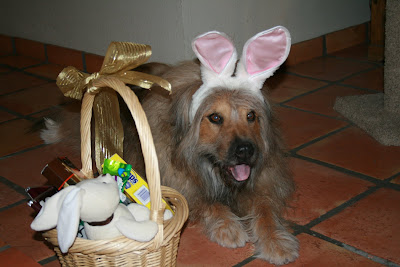 Posted by Joy Collins at 4:01 PM No comments: