Today is our sweet Toby's birthday. Our little girl, the little ugly puppy who grew into a beauty and fills our home with love is 12 years old today.
Happy Birthday, sweet one! Mommy and Daddy love you.

Posted by Joy Collins at 7:44 AM No comments:

Riley is one lucky kitty

Riley coughed up what I thought was a hairball the other day. Except when I went to check it out it didn't look like any hairball that I had ever seen. Without getting into the gross details, after investigating I realized what it was - plastic. More specifically the drawstring portion of a kitchen garbage can liner. The only thing I can figure out is that it came from my office. 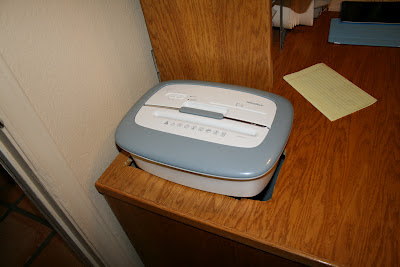 Under that opening is a large wastebasket to collect the shredding. I used to line the wastebasket with a kitchen garbage bag but last week Riley pulled it up through the hole so I threw the bag away, never looking to see if anything was missing. Apparently, he had already chewed off a portion and swallowed it.
Why is a good question. It can't have tasted good.
I thought I was being careful. I never leave plastic bags around because I know he is attracted to them.
I just did not think he would do what he did.
And I am so grateful he didn't develop a blockage from that.
He - and I - are so lucky.
Posted by Joy Collins at 11:20 AM No comments:

Hanging out with big sister 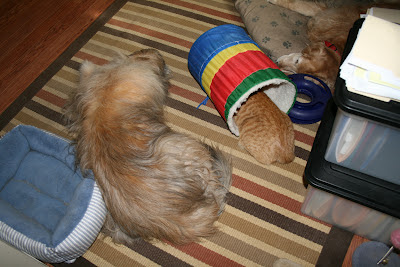 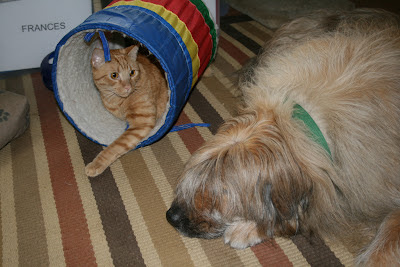 Toby's tumor was benign [thank God!] but Chaz did his part keeping her company anyway while she recovered.
Posted by Joy Collins at 6:29 PM No comments:

Posted by Joy Collins at 7:21 AM No comments: