Chaz playing a game on my iPad

Posted by Joy Collins at 2:08 PM No comments:

More of Chaz and the laser

Chaz never tires of chasing the laser light around my office and he begs for it all day long. If I ignore him, he gets on his tippy toes next to my chair and taps me on the arm as if I forgot that he was there begging.
I wasn't getting any work done.
So I went to Petco yesterday and bought an automatic battery-operated laser toy. It was the best $20 I ever spent. He loves it.
Of course now he begs for me to turn it on all the time but at least I can get 15 minutes of peace now when it's on.

Posted by Joy Collins at 8:09 AM No comments:

I continue to have work done on the house and for the safety of the cats, they are locked up in our bedroom during the day while the workers are here. Now, being locked up in the bedroom is not as bad as it sounds. This bedroom is quite large and they also have access to John's office which is a large alcove off to the side [no door]. They also have access to the dressing room and master bathroom in which is their litter box and food. There is a large water dispenser in the bedroom itself. So they actually have a kitty suite all to themselves.
But they are not in the midst of all the action and they can't do what they want which in kitty terms is a cat-astrophe [sorry].
So after a few days of this Chazzie has gotten angry. And he has been showing his anger by taking it out on his siblings.
The other night, he tackled Riley and was biting him on the neck. Then he really went crazy and lost all sense. he deliberately walked over to Toby and bopped her on the head not once but twice. She lunged at him and growled although she didn't hurt him. It was just a warning.
Chazzie took heed and took his anger out on the comforter next. He grabbed a mouthful of it and shook his head with it as if the comforter were prey. I had to laugh. He was just so darn cute.
But I also realized he was having a real problem and needed help.
So I picked him up and cuddled him. I was surprised he even let me but he immediately started purring. Encouraged by this I carried him around for a while, soothing him. I then dosed him with his flower essences that seemed to work for him a few months ago.
I have been giving them to him twice a day since then and I am seeing his happy disposition return. The workers are gone this week so he and I get a break.
Posted by Joy Collins at 6:51 AM No comments: 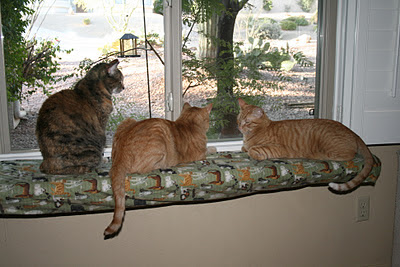 The cats love watching the wildlife out my office window. We have loads of birds that come to visit several times a day and a couple of bunnies. I have to admit the bunnies are my favorite. I even started putting rabbit food out for them. It also spares my bougainvillea because the bottom few inches are now bare because of them. And the kids enjoy watching them.
Posted by Joy Collins at 8:16 AM 1 comment: