They call me Mister Tubbs!

Dr. Tom our wonderful veterinarian came by the house this week to give everyone their annual exam. Everyone did fairly well. Bella was excellent. I was afraid she would be very rambunctious and bark at Dr. Tom but there wasn't a peep out of her and she was very cooperative, even though she had to get a shot and an oral medication.
Riley has some dental issues that we will need to address but right now we are more concerned about his poor appetite and weight loss. Dr. Tom is coming back in two weeks to microchip Bella and check on Riley's progress. For now he can have any food he wants and for some reason prefers baby food. I will be weighing him daily to make sure all is well.
But the big surprise was Sean. The "baby" now weighs the most of the three cats. He's 15 pounds! Chaz is a little behind him at 14 pounds. 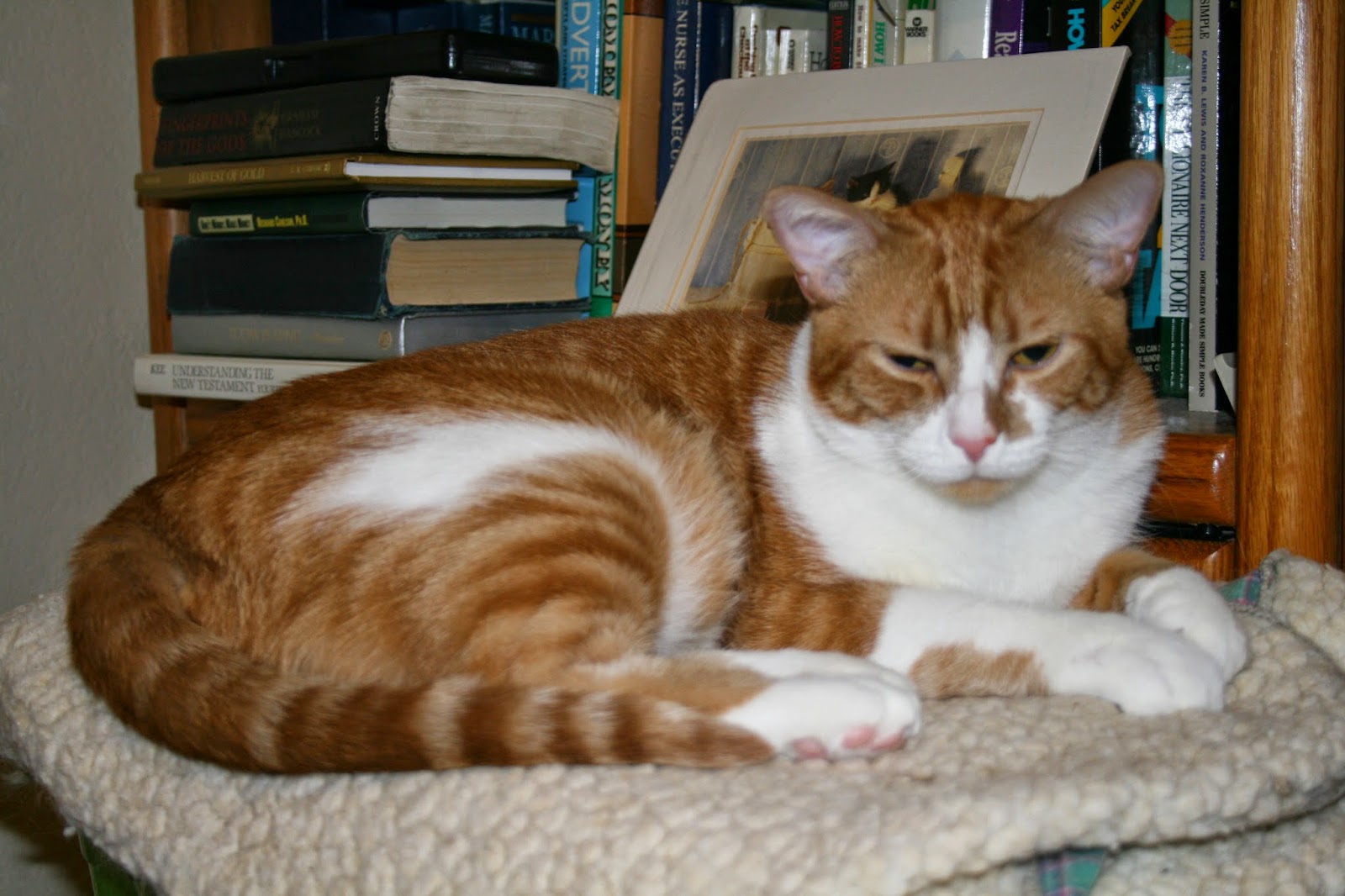 Posted by Joy Collins at 9:30 AM No comments:

Sean loves to snuggle at night with Riley. He seeks him out and asks to be groomed and babied. 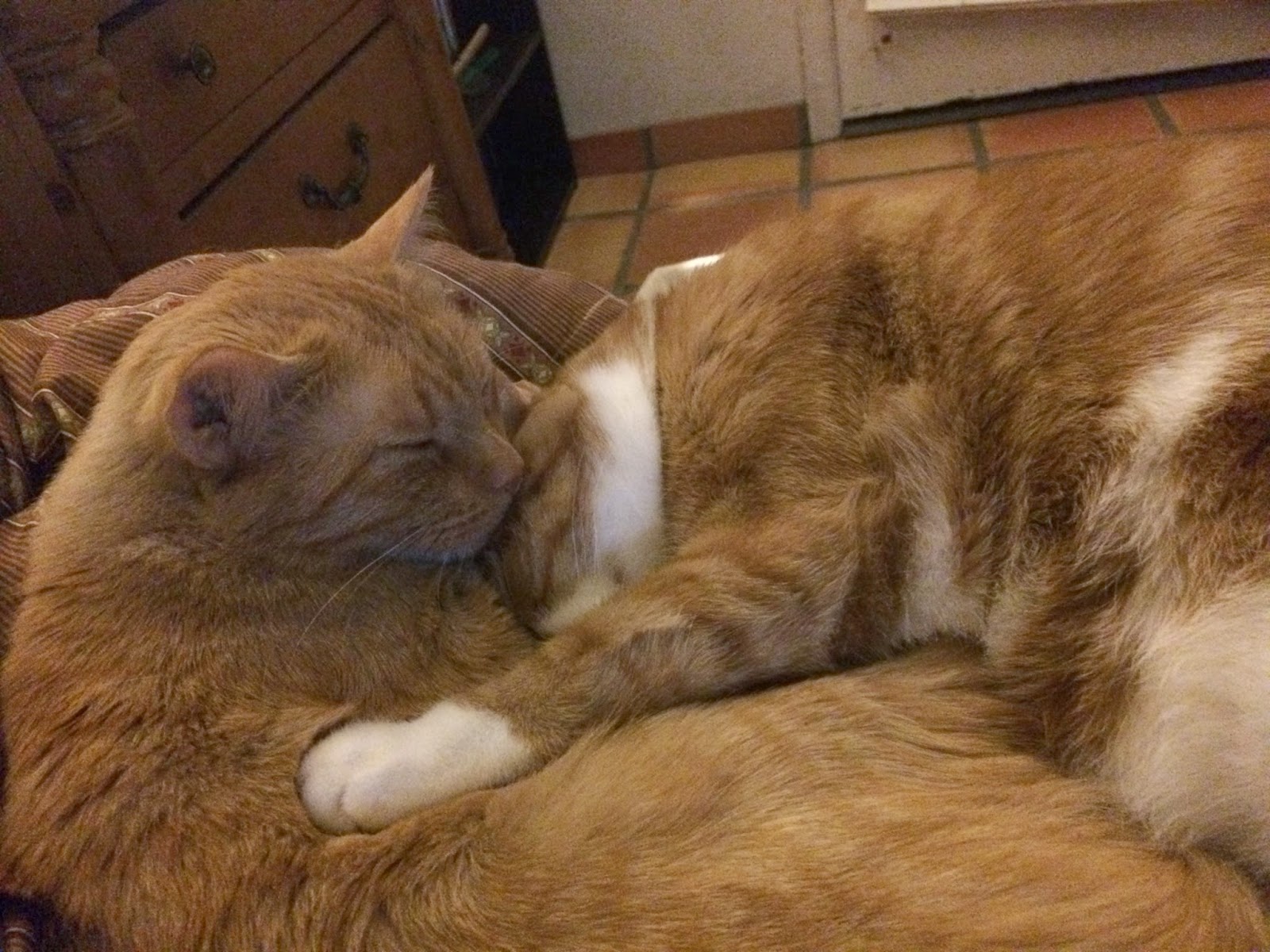 Posted by Joy Collins at 4:29 PM No comments:

Good news!
Dr. Tom just called and Riley's lab work is normal. Yay!
We think he just doesn't want the herbs any more - either they were making his tummy upset or he is telling us he doesn't need them any more.
So Riley gets to eat anything he wants and I am going to stock up on his favorite tuna and crab dinner that he likes so much.
Posted by Joy Collins at 2:40 PM No comments:

Riley's Not So Excellent Adventure 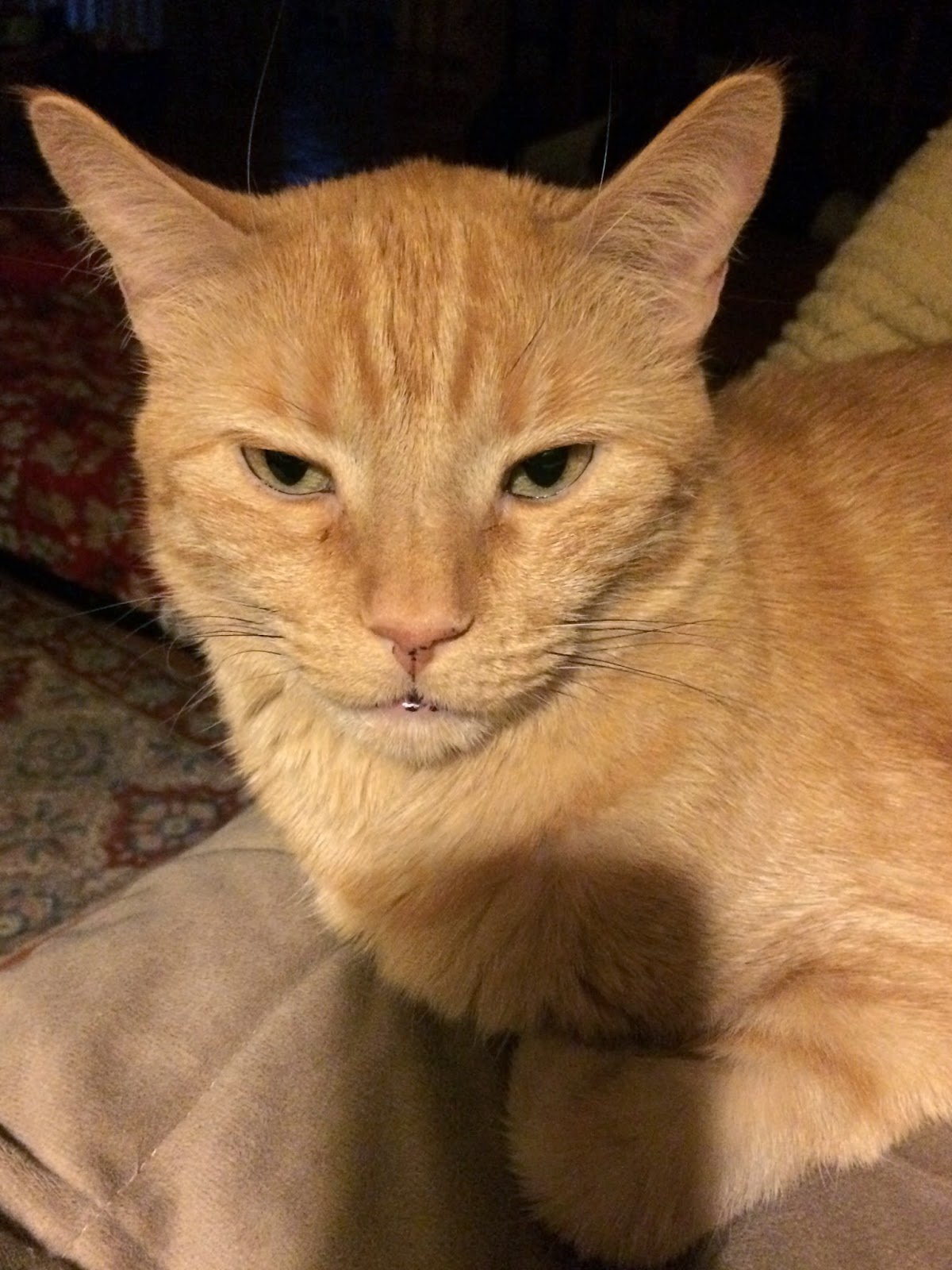 Riley has had a poor appetite these last couple of weeks and has started losing weight. His playfulness has stayed the same and his fur looks good but I can see his little hip bones. At first, I chalked it up to him just being bored and tired of his canned food. Then I thought maybe he didn't like the herbs he was taking for his history of bladder infection. Maybe the herbs were making his tummy queasy.
So I called our vet and mentioned all of this to him. He decided it might be an indication of developing kidney problems and should be looked into, just to be safe. So he ordered some blood work. And since he was booked up and wouldn't be able to come to the house for a little while, we decided that I should take Riley down to the local animal hospital where he has gone before and have one of the techs draw the blood.
As it turned out, easier said than done.
Riley hates going to the hospital. I'm sure he has not so fond memories of being there and having a catheter inserted. So he fought them at every turn when the tech tried to get his blood sample. They muzzled him. They had a tech holding him and a tech trying to take the blood. None of that worked.
Finally, they called me in and asked me to help by talking to Riley, hoping it would soothe him.
Riley still wasn't happy but he did seem to respond to my voice and touch. It broke my heart to see him so unhappy. But after what seemed like an eternity the tech said she had enough blood for the test and we released Riley. I snuggled him and put him back in the carrier. He was only too happy to go back in.
And all three of us - the two techs and me - were absolutely covered in orange cat fur. I have never seen anything like it. I understand that cats can release their fur like that when they sense trouble so their potential captors won't be able to grab them. Poor Riley was obviously scared out of his mind based on all the fur he had released.
Riley complained all the way home in the car but once I let him out inside the house he settled down and was happy again.
The blood work should be back on Monday. I am hoping and praying all will be well.
Posted by Joy Collins at 7:56 AM No comments:

TV for the cats 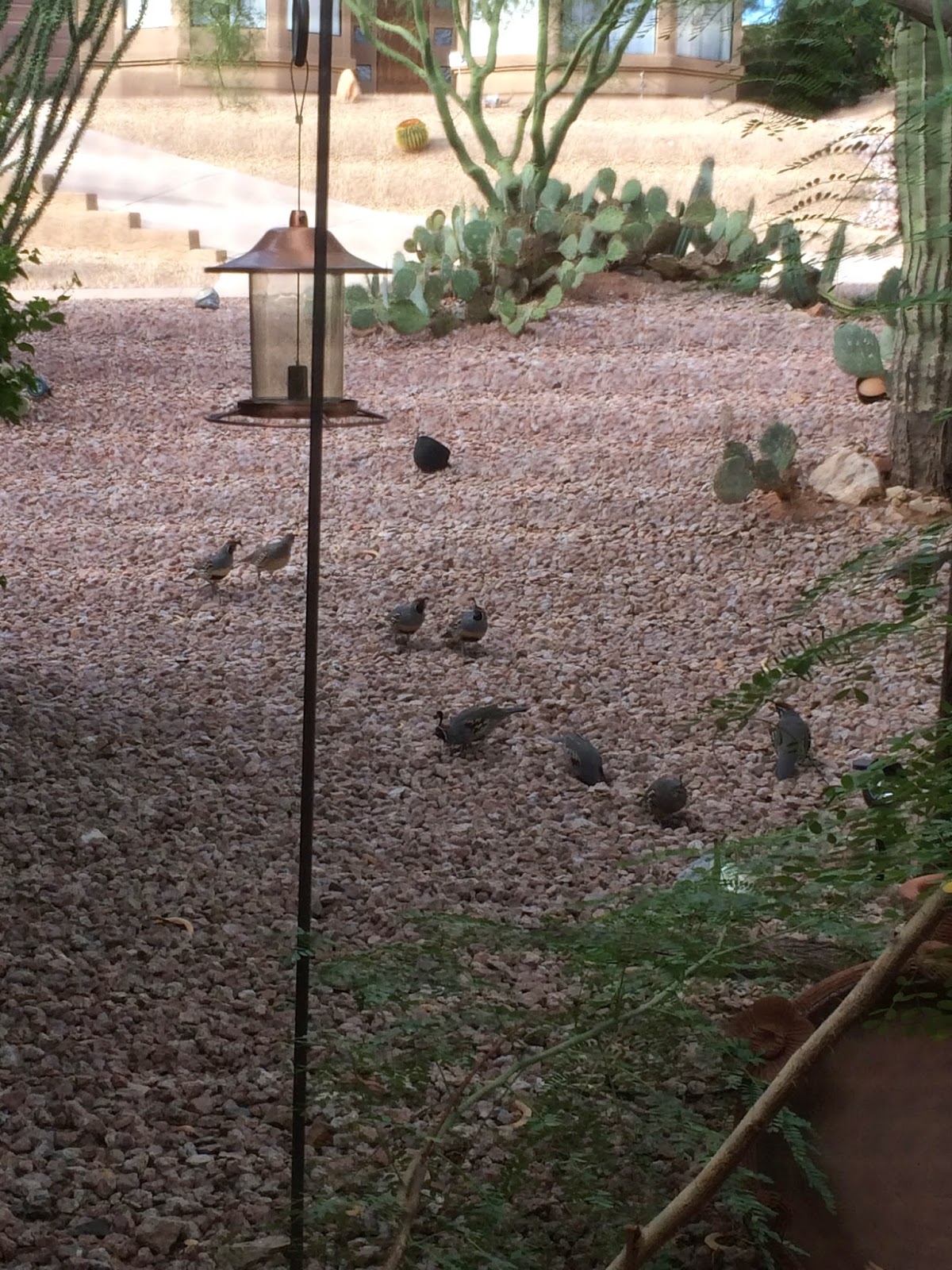 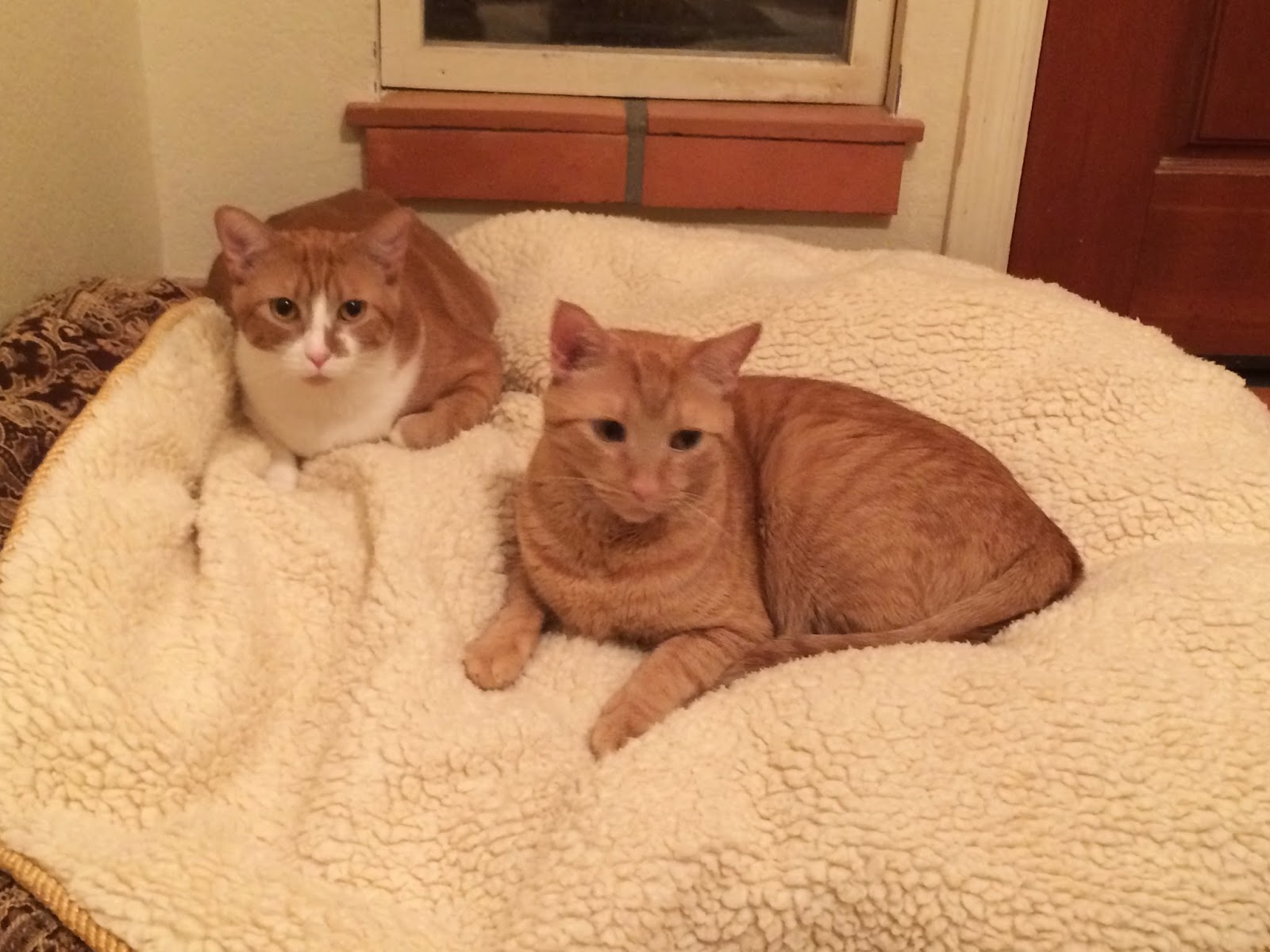