Riley and the toilet bowl

Well, it had to happen.
Riley - who has an obsession with water - discovered the mother lode. He either heard the water or smelled the water but he had discovered that the tank behind the toilet holds lots and lots of water.
So last night during the night we heard the unmistakable sound of someone [Riley] trying to lift the lid off the tank. He stopped when we yelled at him but he was back at it this morning. I was afraid he would topple it off the tank, it would break and he would get hurt - not to mention we'd be looking for a new lid.
So, I taped the lid to the tank. It looks lovely - NOT!
See for yourself. Please excuse the wall. The bathroom is going through a remodel [if you click on the picture, you can see the tape better. Hit your back button to return to this page]. 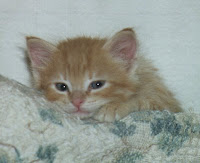 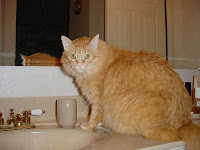 Riley is in love with printers 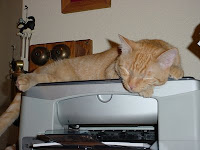 Riley is fascinated with our printers. He loves to hang out on them, sleep on them, and wait for paper to either go into it or come out of them. Must be nice to be amused by so little. I almost envy him.
Posted by Joy Collins at 8:03 AM No comments:

Riley is one year old today! 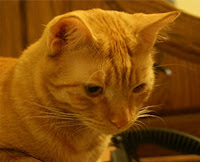 Of course, we don't know Riley's real birthday. This is the day we chose for him when the vet came to see him for the first time. But it's pretty close based on how old he seemed at that time. We have our own thoughts about this too since we suspect he might be Buster come back to us [more on that at a later date]. But this is the day we have chosen and today we celebrate our little boy.
Happy Birthday, Riley!
Posted by Joy Collins at 8:58 AM 1 comment:

"Governor Sarah Palin's administration has launched a terrible new assault on wolves in Alaska. In just a few days, 66 wolves were killed by aerial gunners with high-powered rifles. Even worse, Palin's Board of Game has also approved the use of poison gas and deadly snares to kill defenseless wolf pups and their families in and around their dens.
Governor Palin is escalating her bloody war on wolves, and we need your help to stop her. Too many wolves have already died needless deaths – this brutal practice has to stop." [http://www.care2.com/]
Please go here to sign the petition. http://www.thepetitionsite.com/takeaction/579425122?z00m=19752410
Posted by Joy Collins at 7:07 AM No comments:

Sometimes Mom just has to have fun.
We renewed our membership in AARP the other day and yesterday our "free gift" arrived - some kind of belly bag thing. Of course, I decided it would look great on Riley.
Don't you think he would make a wonderful service cat?
He wasn't so sure.
Posted by Joy Collins at 8:17 AM 1 comment:

Mom, he's touching me!
Don't touch your sister!
How many times have parents said that to their children? I found myself saying the exact same thing to Riley the other day. He didn't care.
Posted by Joy Collins at 8:51 AM No comments:

Living the wild life in Arizona

As I sit here writing I am being serenaded [I am being sarcastic] by a retarded woodpecker. Instead of attacking a tree or cactus to look for grubs or whatever it is woodpeckers look for, this idiot is pecking on the metal spark arrester on our chimney. Do you know what that sounds like? Why he isn't getting a headache, I don't know. And this isn't the first time he's done this. Yesterday was the same thing and he has been at it before then as well. Guess he's a really slow learner.
I was also on the phone with the local animal control people last night. Not for the woodpecker. He's a lost cause.
No, yesterday morning while on the phone in my office, I glanced out my front window and there, big as life, walked a mountain lion with his catch of the day in his mouth. I couldn't believe my eyes. This was the second time I have seen one in town. We live in a relatively rural section of Arizona. Kind of a suburb to a suburb. Mountain lions have been spotted before but to actually see one live was a treat. I didn't think to be upset about it but the animal he had in his mouth was a cat [dead] and it looked like a neighbor's cat so we told them when they arrived home last night. Turned out not to be theirs but they reported the sighting to animal control anyway who then asked to speak to me since I was the witness. Frankly, I hope they don't hunt the animal down. He has a right to survive. My feeling is this is just something we have to accept living where we do. They were here first. If you don't want to deal with the wild life, don't live here.
I do feel bad for the cat, though. Why people don't keep their pets indoors when there are so many predators around is something I will never understand.
Posted by Joy Collins at 7:01 AM No comments: