I love my furbabies. Anyone who knows me knows that. John and I always considered them to be our kids and we doted on them. I still do.
I am so careful with them too, always worrying about their safety.
Yesterday was almost a disaster.
I was having the dryer vent and the duct system in the house cleaned. It involved loud vacuuming noises and keeping the front door open and men having access to all the rooms. For their safety, I put the dogs in the yard and I placed all three of the cats in carriers and put them in the master bedroom. The cats were not happy about it and let me know. But it was for their own good.
So, the men arrived and started to work. There were two of them, both very nice.
At one point they needed access to the attic and that meant going through the opening in the closet in the master bedroom. By this time they had been working about 15 minutes. I thought I would move the carriers out of their way and grabbed the carrier I had placed Riley in. It was extremely light and to my horror he was no longer in the carrier! Immediately panic set in. I had no idea where he was. I screamed for the men to stop their work and close the front door. I can not describe to you the fear and panic I felt after that. We searched the house. One of the men went outside and searched the yard. I thought I was going to collapse from the fear of losing Riley. The sheer panic was overwhelming.
Finally, finally, one of the men found him hiding under a desk in the dinette. The relief.................
I put Riley in another carrier and placed all three of the cats in the shower in the master bathroom, closed the shower door and then closed the bathroom door.
Later I checked the carrier Riley had been in to see why he had escaped. In his sheer panic he had chewed through the mesh panel. 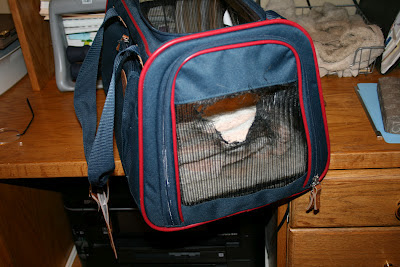 I can't imagine the terror the poor baby must have been feeling to do that.
Riley slept with me last night. At one point he cried out in his sleep. I think he was reliving his nightmare.
Today on Mother's Day I thank God he is still safe and with me.